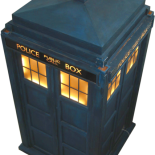 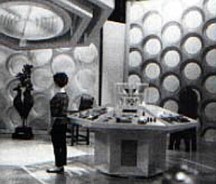 Schoolteachers Barbara Wright and Ian Chestertonare intrigued by one of their pupils, Susan Foreman. They visit her home address – a junkyard at 76 Totter’s Lane. There they meet her grandfather, the Doctor. The Doctor and Susan are aliens who travel through time and space in their ship, the TARDIS. It looks like an ordinary police box but actually houses a huge, gleaming control room. The TARDIS takes them all to a Palaeolithic landscape where they encounter a tribe who have lost the secret of fire.

The fact that Ian and Barbara are confused really gives the story a little kick.  I didn’t like how the cave men treated the main characters because most cave men tribes don’t want anything to do with other tribes unless they are conversing about food.   My favorite character was the old woman in the cave because she acted as though she didn’t want change with the fire.  It wasn’t a scary episode because it wasn’t violent, harsh or inappropriate.  I thought the Doctor wasn’t happy about Barbara and Ian forcing their way aboard the TARDIS.

Beginnings are a very delicate time.  While that might sound pithy, it is definitely true for Doctor Who.  An Unearthly Child  holds a special place in a Whovian’s heart, but it definitely deserves no more than the 2 1/2 stars that DC (Doctor Caleb) gave it.  Plenty of series that are held in high esteem  have problematic first episodes – Star Trek, Babylon 5, and Star Trek: TNG, just to name a few.

The story is a bit uneven.  You start out with an introductory episode and then go back in time to the time of cave men who covet the ability to produce fire.  Hartnell seems more cranky during this episode than in many that will come.  Maybe this is understandable given Barbara and Ian’s invasion of his space.  However, by the time we move into The Daleks story, this attitude appears to change.

The tribe of cave people are also just plain annoying.  They are greedy and selfish savages with few redeemable qualities.

An Unearthly Child is worthy of your viewing at least once.  However, if you are like me you may not make a second trip back to watch this earliest trip in the TARDIS.

This entry was posted on February 14, 2013 by eggstirmen8 in First Doctor, Review and tagged BBC, Doctor Who, susan foreman, Television Reviews, William Hartnell.