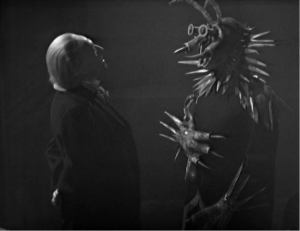 The Doctor, Ian and Barbara arrive on the planet Dido. A crashed ship is terrorised by the monster Koquillion, but things are not what they seem…

This is a very odd story and only really worth of two episodes.  The hallmark of this episode is the almost serial deceit exhibited by some of the supporting cast.  Nothing is what it appears to be or what it seems.  Vicki is the only honest person in the lot.  This is a quite common theme that runs through the first two seasons of Doctor Who, but it is much more pronounced in this episode.   This is one of the first instances where the Doctor returns to a planet where he has been before and has knowledge of a race that we don’t discover with him.  This is common in modern episodes where the Doctor seems to know about all races even if they are truly new to the series.

This entry was posted on April 25, 2013 by eggstirmen8 in First Doctor, Review and tagged BBC, Classic Who, Doctor Who, Television Reviews, William Hartnell, William Russell.